In 1975, Dr. David Hon was a leading physicist at Hughes Aircraft Corporation. Dr. Hon and his team developed breakthrough laser technology that was used on NASA space shuttles, US missile guidance systems, and laser-guided anti-aircraft guns. Despite all of his successes, Dr. Hon was unfulfilled. His work was being used for war, rather than improving society.

Dr. Hon's inspiration struck while waiting in an hour-long line for gas. He was going to design and build a portable folding bicycle! For the next seven years on weekends and evenings, he built numerous prototypes. And, in 1982, Dr. Hon unveiled the first Dahon folding bicycle. It quickly gained international acclaim.

Yet, even with all the awards, he was unable to convince any of the major bicycle manufacturers to license or even build his design. So Dr. Hon quit his job, moved to Taiwan and built 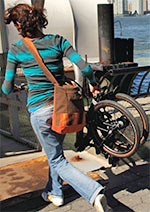 his own factory. And, by 1983, Dahon folding bicycles were rolling off the assembly line.

Today, Dahon bicycles are making a difference! With over 2 million Dahons produced, you can find happy commuters riding these flying folders in nearly every city. Based in the busy city of Los Angeles, Dahon is committed to creating green mobility solutions for people who live active, environmentally friendly lifestyles.